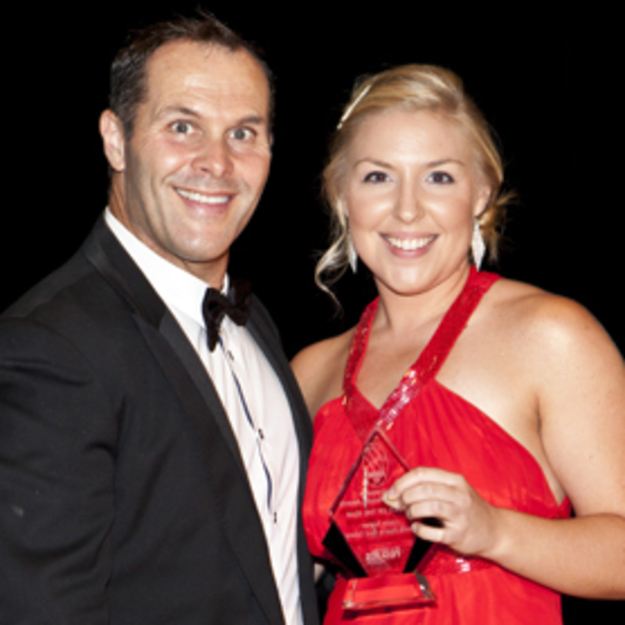 The Strathpine-based agency glittered among a throng of industry hotshots at the 2012 annual Australasian Real Estate Results Network Awards (ARERA’s).

Mark Rumsey won the coveted Queensland Agent of the year; Cassie Turner (pictured with Michael Sheargold) won Rookie of the Year; Tia Jensen was awarded Support Star of the Year and principal David Deane was recognised with a Lifetime Contribution award.

Turner was a finalist in the same category in 2011 and impressed the judges to go one better on the weekend.

“It’s great to get the recognition as I have only been out on my own since May last year,” she says.

“We are seeing lots of enquiries this year, it’s definitely a buyers’ market and we expect that prices will stay at this level for a while yet.”

Turner sells up to five residential properties per month and is fast-tracking success after starting as a personal assistant.

Co-principal Belinda Deane, says the 22-year-old has a bright future.

“That’s what these awards are all about, celebrating and commending people for excellence and Cassie is such an inspiration to young people looking to enter the real estate industry,” she says.

“Cassie has had real estate coaching and continues to go from strength to strength and ahead in leaps and bounds. Determined to succeed, she is a fantastic role model for our younger team members and our clients absolutely love her. She delivers what she says she will deliver and is results driven.”

Picking up the Agency of the Year 2012 was a sweet victory for McConnell Bourn Estate Agents. The Lindfield-based realtor was recognised for outstanding achievements in the industry during 2011, with a strong focus on service excellence, community achievement and innovation.

Founded by Matthew and Samantha Bourn in 2000, the couple sought a shift away from the ‘large multi-office’ mentality and have since created a workplace culture that inspires staff and an agency that strives to be the best in the game.

“This award means a lot to the agency and all of our hard working team who go above and beyond to help make McConnell Bourn an industry leader. It’s nice to be recognised for the amount of effort our entire team contributes,” says Matthew.

“With a passion for the industry and a trademark perspective on providing unparalleled attention to detail, we are making an indelible mark on real estate after bringing together a talented team that broadens the company’s scope of work.”

McConnell Bourn is now firmly established as one of the fastest growing real estate companies in Australia and has placed in BRW’s Fast 100 list both in 2008 and 2010.

“We employ an energetic, dedicated and closely integrated team, each bringing their unique skills to the firm and each dedicated to providing a personal and professional experience. Awards like this boost morale and it is a testament to the energy and results of our team ,” adds Matthew.

Cunninghams Property cleaned up with former professional surfer Kingsley Looker winning NSW Agent of the Year; Principal of the Year was awarded to John Cunningham; Georgi Coward scooped the Marketing Campaign of the Year (+$5000); while the company won Boutique Agency of the Year.

Real Estate Results Network founder and CEO Michael Sheargold, congratulated the finalists on not just surviving in 2011, but thriving during a challenging year.

“The awards are hotly contested by some of the nation’s top performers and again we were impressed by the high level of competence and quality shown by agencies and the people behind the brands,” he says.

“There is such a diversity of skills showcased across a broad category base and each and every finalist and of course all of the winners have stepped up to the plate and excelled.”